While I was on holiday at Seahouses in Northumberland, I visited the nearby railway station at Chathill, arguably the smallest and least used terminus on the railway network. The station has only two arrivals and departures Monday to Saturday, with no service on Sunday. Although on the East Coast mainline, there are no services from Chathill heading north. Both services leave heading south to Newcastle or Hexham. The photos in this gallery show my visit on July 7th 2016 to see the arrival of the 18:49 from MetroCentre, and its subsequent departure at 19:10 to Hexham. Chathill railway station on [Read more] 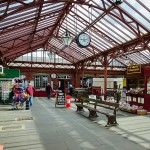 In 2015, the Severn Valley Railway celebrates its 50th year, having been brought back to life in 1965 after the purchase of the line from British Rail. Since then, the Railway has developed into one of the best preserved railways in the country. The journey is full of interest, as the route follows closely the course of the River Severn for most of the way on its journey between Kidderminster and Bridgnorth. Severn Valley Railway’s Kidderminster station I visited the line on a sunny Saturday in June on a day when a food festival was being held in the Engine Shed [Read more]

Photos taken during a visit to the Severn Valley Railway on Saturday 6th June 2015.

They say time flies by as you get older, and for me, this was certainly true in 2014. No sooner had the buds burst out on the trees, than the leaves were falling and Winter was returning to this part of the United Kingdom. I suppose the main reason the year flew by was because I was kept busy most of the time. I don’t seem to get bored, although I do have many moments when I sit around and watch the World drift by. Not having to work does give me the luxury to enjoy these quiet moments, and [Read more] 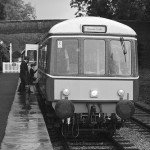 I was born in an era of steam railways, but this era was soon to come to an end, and when I reached my teenage years, steam was rapidly being replaced by diesel. My favourite form of diesel engine was the diesel multiple unit, or DMU. I fondly recall riding through the Peak District in a DMU on the Sheffield to Manchester line. DMU’s are now becoming increasingly rare, but one place that has preserved several of these units is the Ecclesbourne Valley Railway, which runs through central Derbyshire between Wirksworth in the north and Duffield in the south. This [Read more]