Home » Storms and floods as I enter this World
Add comments

I was born in my grandparent’s small, two-up, two-down Victorian terrace on Albert Street, Eastwood. The house was part of a block with Scargill Street, Victoria Street and Princes Street forming the other sides to the ‘square’, as it was called. The house was demolished years ago, but I can still remember the tin bath hanging outside, the ‘copper’, also outside, which was the only way of heating water for the house, and the black iron kitchen ‘range’, which was the source of heating for the house and was where all the food was cooked. There was a small sink in the corner, which supplied the cold water for the house.

The front room in the house, the parlour, backed onto the street and was only used for special occasions. The family lived in the kitchen, which was very different to what we think of today, and was the hub of the family life. There was only one toilet, and that was outside in the back yard. Dark and cold without lighting.

Taken in the early 60s, this photo shows the ‘square’ and in the distance, Albert Street, where I was born.

The rubbish strewn ‘square’ in the centre of the block of houses was the only place for children to play, and I spent many of my childhood years at my grandparents house playing cricket in the ‘square’. Maybe this is where I got my interest in cricket from.

My interest in the weather probably stems from the night I was born. January 31st 1953 was the night of the Great North Sea flood. More than 2,000 people drowned along the North Sea coast in the greatest sea surge on record. Vast swathes of Eastern England were swamped as the sea broke through and destroyed sea defences. 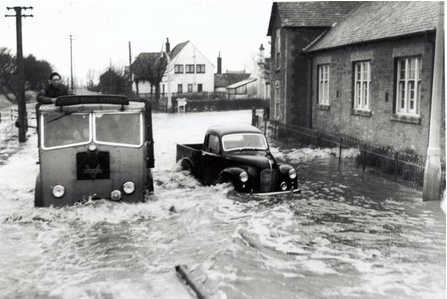 Vehicles negotiate the 1953 floods in Mablethorpe.

307 people lost their lives in England, with over 1,800 deaths in the Netherlands. A car ferry, the Princess Victoria, sank in the Irish Sea with the loss of 133 lives.

The surge was predicted by the Met Office, but communications in those days were so poor that most coastal regions were unaware of their impending doom. Telephones were the main means of communication and many of these had been downed by hurricane force winds.

By midnight, the centre of the storm had moved to Suffolk and Essex. 58 people died on Canvey Island when the sea walls collapsed, and in Clacton, the sea rose a metre in 15 minutes drowning 35 more. The surge travelled into the Thames estuary swamping thousands of homes in London’s East End.

The Met Office Education Department explains what caused the storm:

In the early hours of 30 January 1953, the storm that was to cause the havoc was a normal looking depression with a central pressure of 996 mb, located a little to the south of Iceland. While it looked normal, during the day the pressure rapidly deepened and headed eastwards.

Meanwhile, a strong ridge of high pressure had built up over the Atlantic Ocean south of Iceland, the pressure within being more than 1030 mb. In the steep pressure gradient that now existed on the western flanks of the depression, there was a very strong flow from a northerly point. Winds of Force 10 were reported from exposed parts of Scotland and northern England. The depression turned south-east and deepened to 966 mb before filling. By midday on 1 February, it lay over northern Germany, its central pressure 984 mb.

All day on 31 January, Force 10/11 winds blew from the north over western parts of the North Sea. They drove water south, and generated waves more than eight metres high. The surge originated in the waters off the north-east coast of Scotland and was amplified as it travelled first southwards along the eastern coasts of Scotland and England, and then north-east along the coast of the Netherlands. It reached Ijmuiden in the Netherlands around 4 a.m. on 1 February.

When all this mayhem was taking place, I was making my entrance into this World at 20:00 on Saturday 31st January 1953. My mother always told me that as I was being born, the storm blew the tin roof off the outside toilet. Quite an entrance!