The wet and mild Winter weather continued into February, which was the windiest ever recorded, with temperatures and rainfall both well above average. There was an almost continual run of Atlantic low pressure systems, including the deepest low ever to pass over Bracken House. The average temperature in the month was 5.5°C, 1.5°C higher than the February mean, but 0.5°C lower than 2011’s record. The maximum temperature was 11.3°C on the 23rd at 15:11, with the lowest temperature being -0.3°C on the 10th at 05:36, the only time the thermometer dropped below zero in the month. This was only the [Read more] 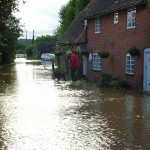